Surveyors from the County of Santa Barbara, California USA decided to expand their range of in-house services by performing hydrographic surveys of local creeks using their CEE HydroSystems CEE ECHO™ survey echo sounder and HYPACK® hydrographic software.  The Santa Barbara team are part of an ongoing flood control project, that requires periodic surveys of the Goleta Slough creek system and surrounding wetland. The Goleta Slough is close to the Santa Ynez Mountains with a steep, undeveloped or agricultural watershed resulting in substantial sediment runoff. Deposition of this sediment in lower velocity areas around the slough raises the ground surface elevation, affecting flood patterns and decreasing the ability of the channel to convey floodwaters to the ocean. Maintaining the environment in this area therefore requires periodic dredging, which can be planned only with an accurate map of the area’s surface elevations – above and below the waterline. Planners at Santa Barbara Flood Control therefore need to employ several survey techniques to acquire a complete view of the changing topography of the slough wetland habitat. 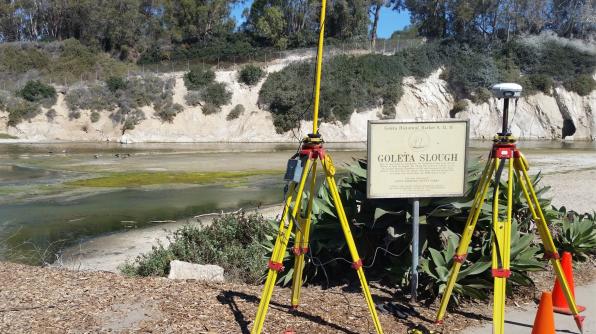 The hydrographic surveying team, led by Scott Brichan used their existing Trimble R8 GNSS rover to supply RTK position data to the CEE ECHO™ echo sounder, which was set to output 20 Hz soundings at cm-level precision to HYPACK® software. The survey was conducted using various boats depending on the water depth and accessibility; the echo sounder was installed on a small unmanned (remotely-operated) survey boat that was also towable by a Jon boat or kayak as required. Measured depths were converted to elevations above sea level after correcting for tidal or other water surface height variation using RTK GNSS. The CEE ECHO™ logged all data on internal memory in addition to the real time output to HYPACK®, providing a backup data file in case of any unexpected computer-related issues during the survey. Using a dedicated shallow water echo sounder was important. As can be seen from the completed survey below, much of the slough is under 1m (3.3ft) water depth.

With the hydrographic data collected, subsequent processing will merge the hydrographic, land survey and LiDAR data into a seamless dataset for the flood control project.